Life Insurance: Dispelling the Myths
There is not always an absolute choice when it comes to choosing life insurance protection for either family or your business.  There is a significant difference between term and permanent protection, and each has an application depending on the needs and objectives of the user. 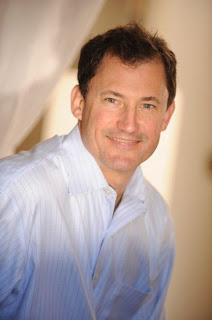 Brian Dixon of Fifth Street Financial Group sheds some light on dispelling the myths of what to know about life insurance and helpful answers to your questions.

A Brief History of Sundown Cinema 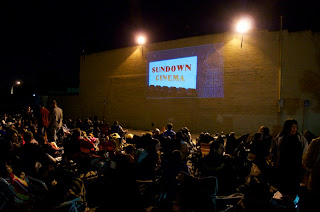 Let's say you thought it'd be really cool to show movies for free outdoors in your town, but you've never done anything like this before. You've also heard that other people have previously tried and failed to organize outdoor movies in your town. Now let's say that you don't have any expertise as an A/V technician, you don't have any of the equipment that you'd need, and you can't afford the thousands of dollars it takes to hire a company that specializes in showing outdoor movies.
These are obviously big problems and unless you had a lot of cash and expertise to throw around, you'd be forgiven if you concluded like others before you that it was more than you could tackle. If you're a single father of five and your name is Manuel Viveros, you'd be unfazed by the challenge. You'll end up applying for a grant from a charity run by your employer (Safeway) to get the funds to buy a modest projector. Then you'll pull apart your living room and drive around town to borrow other A/V equipment you needed. Somehow, you'll figure out where to plug in all those crazy wires. Finally, you'll do your salesman best and manage to convince your entire household and some of your friends that they really want to give up their Friday nights for the whole summer to help you pull off your improvised outdoor cinema.
It sounded crazy then and it still sounds crazy now, but on June 18, 2004, a modest crowd plopped down in their lawn chairs for the first time in the "movie lot" and watched Casablanca. It certainly didn't happen the easy way, but Sundown Cinema was born. It grew steadily through the years and somehow managed to stay relevant in the face of increasing competition from other movie series that were far better funded and professionally staffed.
It was a miracle that the first night ever happened at all and it's an even bigger miracle that Sundown Cinema is in the midst of its eighth season without interruption. It has almost folded several times for various reasons, but disaster would be averted each time when money, organizers, or volunteers would come through at the last minute. Manuel Viveros ran it for four years, a small business owned by a Saratoga resident did it for one year, and Jim Aspinwall and Sheldon Chang (me) have been running the show since 2009.
Since the early days, Sundown Cinema has been through a number of changes. In its original format, it scheduled classic movies almost exclusively because Manuel Viveros thought that it was worthwhile to preserve our cultural literacy of movies from past eras He intended Sundown Cinema to be artistically nutritious as well as entertaining. The current day format of Sundown Cinema has evolved, but continues to honor the spirit of its founding by keeping approximately half of its titles to movies from before 1970.
Our setup has evolved over the years too. We took advantage of a couple of good donation years and upgraded our theater equipment one piece at a time. We have a better projector now and our sound system thumps with 450W in the front and 220W in the back. Thankfully, we've finally amassed enough A/V gear of our own that we don't have to deal with returning stuff to someone's living room after the night is over.
Most importantly, we also now have a seasoned crew of over two dozen volunteers that includes one certified A/V technician. Sundown Cinema isn't quite the fire drill that it used to be, but from top to bottom we're all still volunteers. Once in a while, something unexpected happens and you can tell that we all have day jobs that don't involve running a movie theater. This is one thing that I hope will never change because it's part of the unique character of Sundown Cinema. It's still a movie series run by people who are doing it simply because showing outdoor movies in their community is a cool idea. 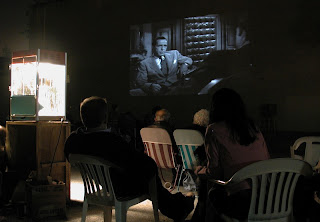 Casablanca was the first movie shown at Sundown Cinema in Downtown Campbell
Posted by Sheldon Chang at 5:47 PM 0 comments

Bryan Robertson of Los Altos had the pleasure of stopping by the Frost Cupcake Factory last week after his dinner here in downtown Campbell. Deciding to venture in before the official opening, he was delighted to find two employees who were very welcoming and nice, as well as the owner (Andrea Parks) who was baking a fresh batch of cupcakes.  Andrea, came out to meet us as well as other customers to get our feedback.  She was very kind, nice to talk to, and offered a free sample cupcake to get our opinion.

Bryan says the new sweet shop is exactly what Campbell needed as a way of offering some truly distinctive variety to the downtown dining experience.  Sure, Campbell has had it's share of yogurt, ice cream, and sweet shops but let's face it, cupcakes are just different.  And in this case, different is better.  These cupcakes offer exceptional texture quality along with flavors that are subtle and distinct.  He also had the Tahitian Vanilla cupcake which had a sublime flavor that exceeds anyone's expectations for a dessert.  If you've had real vanilla, truly high-quality stuff, then you'll know what I'm talking about. 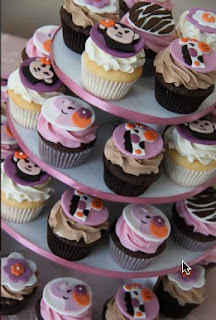 They also had the mocha java and coconut.  All Bryan can say is "WOW!" to both.  He describes the flavors and textures are exceptional and it's like eating cake from a master pastry chef, all in a nice package you can eat at the shop.  The size of the cupcakes is more than enough to make a single enough for dessert.  I'm sure that some folks will feel that one isn't enough but I can assure you it is.  As with anything world-class, a little goes a long way.

So, after dinner downtown, he highly recommends stopping over there.  Frost Cupcakes is located at 199 E Campbell Avenue, between Aqui Restaurant and the Sonya Paz Fine Art Gallery in Downtown Campbell.

Submitted by Bryan Robertson of Los Altos and a realtor for the Sereno Group
To see Bryans blog and more on this story, visit his site!
Posted by studio at 12:50 PM 0 comments

Where is Campbell, CA? 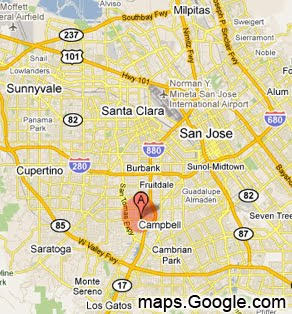 Members of the DCBA